Title: What’s down with Australian inflation?[1]

*I would like to thank Gayathri Illungkoo for her significant contribution to this analysis during her internship at QTC.

There are many ways to disentangle and quantify the factors underpinning low inflation. We have chosen to use a similar approach to Shapiro (2020) at the Federal Reserve Bank of San Francisco, with a few tweaks to match features of the Australian data. This framework uses a simple procedure to empirically group the 87 expenditure class components of the Consumer Price Index (CPI) into one of four categories (Graph 1).[2] This then allows us to assess how important each category is to explaining inflation outcomes. 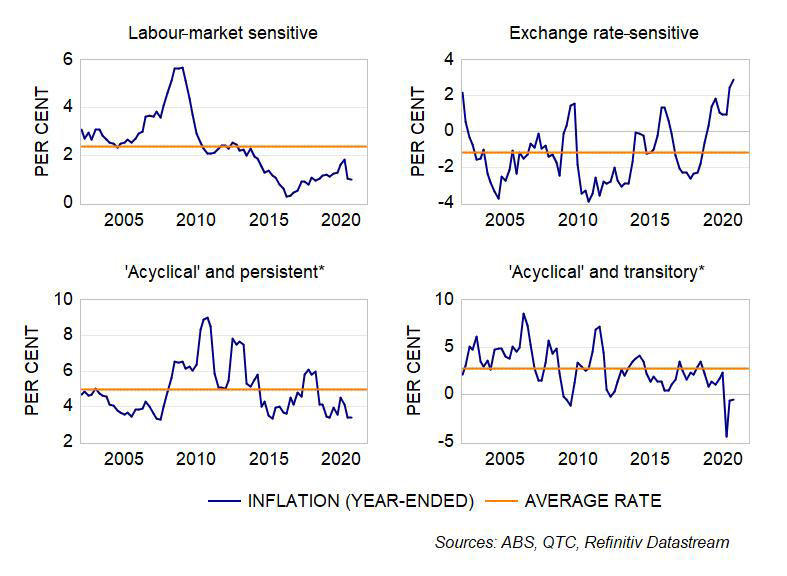 The different inflation categories are summarised in Table 1. Labour market-sensitive inflation represents CPI components that have a significant relationship with labour market slack (ie, the unemployment gap),[3] while exchange rate-sensitive components have a significant response to changes in the Australian Dollar (where this is expressed in trade-weighted terms).[4]

‘Acyclical’ components do not have a statistically significant relationship with either the unemployment gap or the trade-weighted exchange rate. We have further split these acyclical series into two categories, based on how volatile price movements are (ie, ‘persistent’ and ‘transitory’).[5]

Labour market-sensitive inflation is of particular interest. It is a useful indicator of underlying cyclical inflationary pressures in the economy, as it excludes volatile items and prices that have a weak relationship with domestic economic conditions.[6] It should also isolate a key segment of the CPI basket that the Reserve Bank of Australia (RBA) is aiming to affect when it sets monetary policy (with the ‘exchange rate sensitive’ category being the other focal point). Our estimate of labour-sensitive inflation has a similar trend to other measures of underlying inflation in Australia, but with more pronounced cycles (Graph 2). 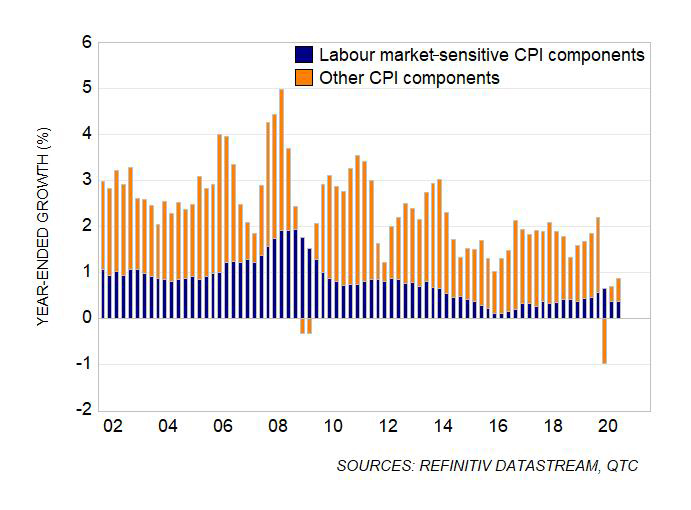 Inflation in this category is highly correlated with labour market slack (Graph 4). The gradual improvement in labour market conditions immediately prior to the pandemic had resulted in slightly higher labour sensitive inflation, though progress was slow, and the pace of growth remained weak relative to history.

More recently, the sharp deterioration of labour market conditions has had a smaller effect on labour-sensitive inflation than expected. This partly reflects strong increases in prices for some specific components during the pandemic, including household supplies, takeaway and restaurants, and some other food items. It could also reflect the swift economic recovery and an expectation that lower aggregate demand will be short lived. 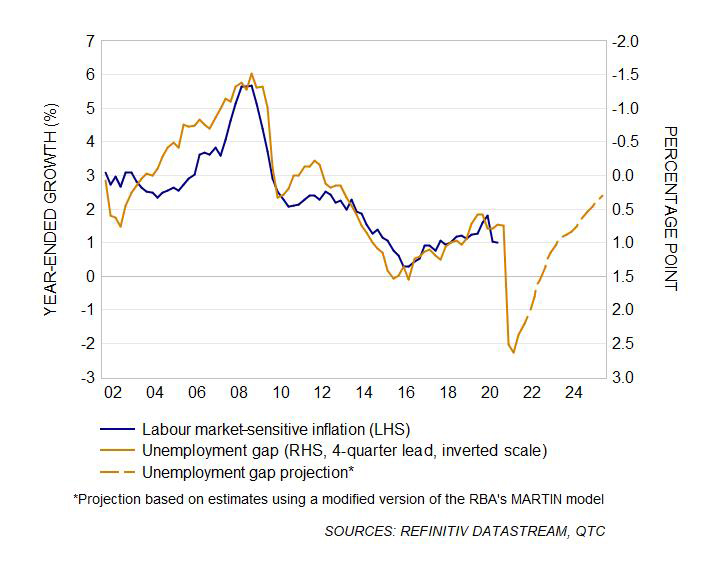 The trends in the other inflation categories have not been as pronounced as that for labour-sensitive inflation. This in itself is a strong argument for this decomposition, as it allows us to more directly observe some of the competing forces that contribute to inflation outcomes. Some of the key results for these other categories are cited below. 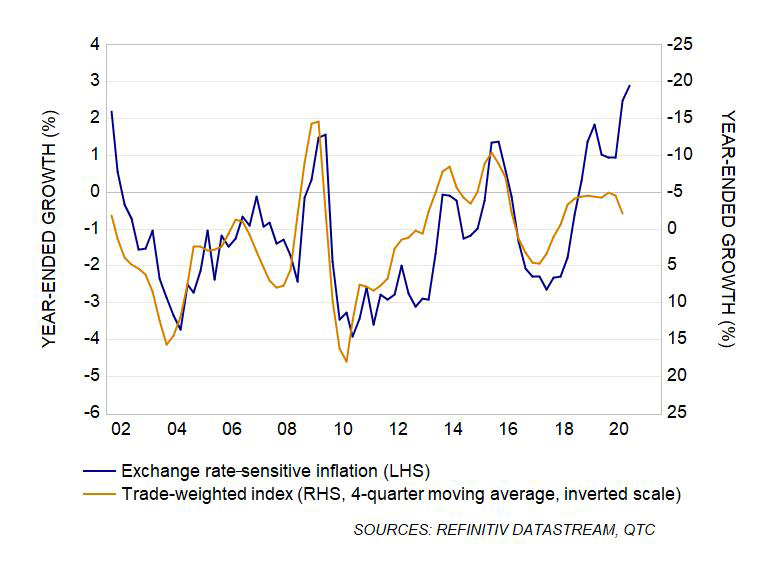 ‘Acyclical’ inflation has been below average since 2019

Movements in persistent acyclical inflation are dominated by utility prices and tobacco. Utility price inflation has been relatively weak since early 2019, due to both a normalisation of prices following a surge in electricity and gas charges in 2017, as well as the effect of special rebates that were introduced in some states in response to the pandemic. This weakness has been partly offset by continued strong growth of tobacco prices.

Transient acyclical inflation includes various volatile and unrelated CPI components. This category explains the initial sharp decline in prices following the onset of the pandemic, due to the inclusion of both fuel and childcare prices.

The RBA has clearly stated its focus on achieving stronger labour market outcomes in the coming years. This emphasis is supported by our analysis, which suggests that weak headline inflation over the past five years has largely been underpinned by labour-sensitive CPI components.

While there is little doubt that a tighter labour market would contribute to higher inflation, the outlook for labour-sensitive inflation is far from clear. One source of uncertainty is the Non-Accelerating Inflation Rate of Unemployment (NAIRU), which is notoriously hard to pin down. Until recently, the RBA had estimated it was around four-and-a-half per cent. RBA Governor Lowe has since stated that it could be ‘in the low 4s’ and that it is ‘entirely possible’ that it is even below 4 per cent.[7]  In other words, we may need to see the unemployment rate fall below 4 per cent before inflation is consistent with its target.

Achieving such low levels of unemployment could take some time, with the RBA not expecting inflation to be sustainably within the target band until ‘2024 at the earliest’. This timeline is supported by recent analysis available on the QTC website, where the baseline scenario estimates the cash rate will start to increase from late 2024 and an alternative scenario sees ‘lift off’ from 2026.

[1] This title pays homage to the paper that popularised the approach we used in this note, ‘What’s down with inflation?’ from Tim Mahedy and Adam Shapiro at the San Francisco Federal Reserve (Mahedy and Shapiro 2017).

[2] See the Appendix for the technical details of this work.

[4] Where there is overlap between the labour and exchange rate sensitive components, we have allocated the series to labour market-sensitive inflation. The degree of overlap is low though, so this choice has no discernible effect on our results.

[5] We define ‘persistent’ CPI components as those that have a positive and statistically significant relationship to its own lags.

[6] Other researchers have used similar measures as an estimate of underlying inflationary pressures. This includes the ECB’s ‘supercore’ measure of underlying inflation (Box 2 in Ehrmann, Ferrucci, Lenza and O’Brien 2018), Stock and Watson’s (2018) estimates for the euro area and the US, and Mahedy and Shapiro’s (2017) from the San Francisco Federal Reserve’s earlier estimate.

[7] These comments were made during the speech ‘The Recovery, Investment and Monetary Policy’ (March 2021) and in the accompanying Q&A session (from 27m48s in the webcast). These observations are not unique to Australia. As Federal Reserve Chair Powell noted at in his US House of Representatives Hearing in July 2019: ‘… I think we really have learned, though, that the economy can sustain much lower unemployment than we thought without troubling levels of inflation.’