In a world of uncertainty, it has proven difficult to see beyond short-term time horizons. In this article, QTC economist Trent Saunders explores Australia’s long-term path to economic recovery and alternate perspectives on how the economy and interest rates could evolve over the course of this decade. Using three scenarios and projections he takes a look at how the cash rate could move over the decade to 2030.

Despite a swift rebound in economic activity, the Australian economy continues to face challenging conditions and the path forward remains uncertain. These exceptional circumstances require us to consider how the economic recovery could play out, not only over the next couple of years, but also over the long term. With the time horizons of most published forecasts too short to make a fulsome assessment of the outlook, I ran some scenarios to see what things might look like through to 2030.

In scenario 1 I used a modified version of the RBA’s large-scale model of the Australian economy – MARTIN1 – and projected the Bank’s forecasts through to the end of 2030. I also used MARTIN to test two other scenarios, where the RBA responds only to its inflation objective (scenario 2) and where there is no lower bound on the cash rate (scenario 3).

The results from these long-term projections lend support to the notion that interest rates could remain lower for (a lot) longer.

The RBA’s February Statement on Monetary Policy presented forecasts to the middle of 2023. To look beyond this, I calibrated MARTIN’s estimates so that they match the RBA’s official forecasts. I then extended these forecasts by estimating the ‘optimal’ path for the cash rate, defined as the path that minimises deviations from the RBA’s targets. 2

The baseline projections for the cash rate (orange series in Graph 1) assume that:

This scenario suggests that the road to a full economic recovery is likely to be slow (notwithstanding the sharp rebound at present). In this baseline case, our future projections would see: 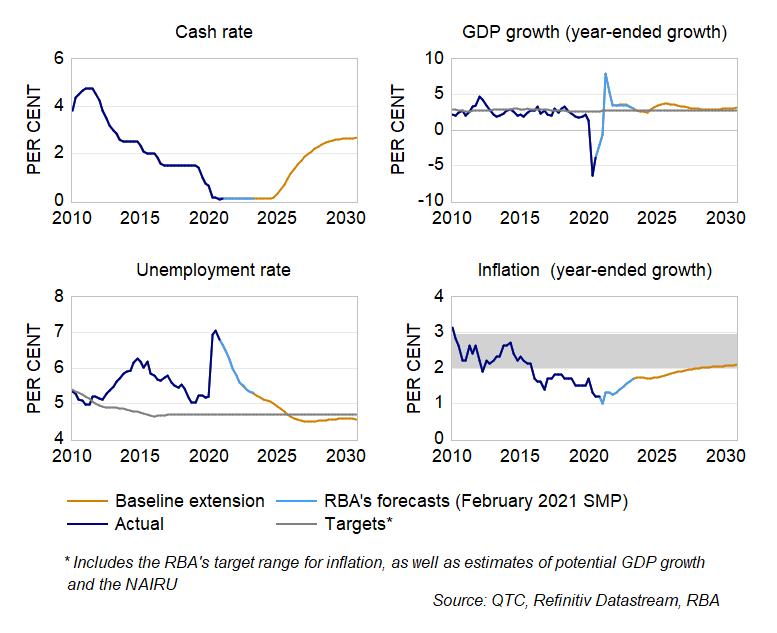 In our second scenario I look at what would happen if the RBA placed an increased focus on inflation. A particularly important assumption underpinning the first scenario is that the RBA responds to both inflation and the unemployment gap. While this is a standard assumption5, the RBA has made it clear that its current focus is on inflation. Notably, Governor Lowe has stated that, ‘the Board will not increase the cash rate until actual inflation is sustainably within the 2 to 3 per cent target range’. 6

This raises an issue for the baseline projections. In this scenario, the cash rate starts to increase at the end of 2024, despite inflation not yet reaching the RBA’s target. This is because the unemployment rate is low, so the model assumes the RBA will step in to stop the labour market from overheating. However, this is not a concern in the current environment and the Governor has identified the high rate of unemployment as an ‘important national priority’. 7

To address this issue, I have estimated the model assuming the RBA only responds to deviations of inflation from its target and places no weight on how far the unemployment rate is away from the NAIRU. The results are shown in Graph 2 (the green series).

Scenario 3 is different (and less likely to occur) than the previous two sets of projections. It assesses what path the cash rate would have to take to see inflation return to the target band in the next couple of years. 8

The results suggest that in the absence of a lower bound, the ‘optimal’ path is for the cash rate to be cut to almost negative 2 per cent and remain negative through to the middle of 2023 (Graph 2, light blue series).2  This hypothetical scenario results in inflation reaching the target band by the second half of 2023, compared to 2027 in the baseline scenario. 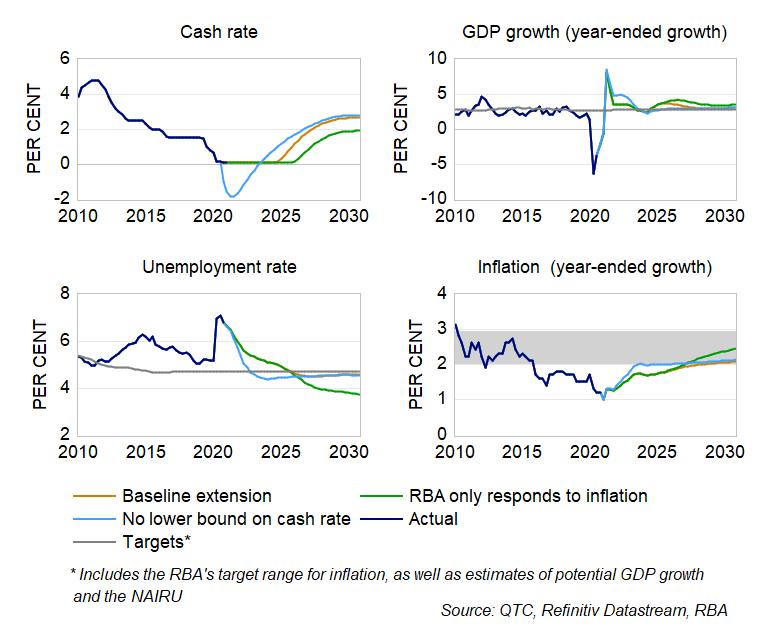 Now, there are lots of caveats around this exercise. It assumes monetary policy largely works as it has in the past, which is unlikely to be true with negative interest rates. It would require the RBA to adopt a much more activist approach to monetary policy than is typical for central banks. It also ignores RBA commentary on negative rates, with Governor Lowe recently stating that the RBA Board ‘… has no appetite (for rates) to go into negative territory…’. 9

Nonetheless, as the statistician George Box famously quipped, ‘… all models are wrong, but some models are useful’. Despite its flaws, this exercise suggests that substantial additional stimulus ­­is required if the RBA is to achieve its inflation targets over the next couple of years. Based on its published forecasts, the Bank doesn’t expect to do so in this timeframe.

This is where exercises such as those in this note can be useful. Looking over a longer period we can get a sense of the potential path for the economy beyond the end of the published forecast period. Doing so reinforces the idea that the cash rate may indeed be ‘lower for longer’.

(1) This modified version of MARTIN is largely based on publicly available code provided by David Stephan at The World Bank (available here). I have made a few small changes to David’s code to address issues with the recent data, as well as to more closely replicate the original data and specifications used by the RBA. Despite these changes, all three versions of the model (from QTC, RBA and David Stephan) have very similar outputs.

(2) I have also included an interest rate smoothing objective into the central bank loss function, to reduce the volatility of the projected cash rate. This optimal control exercise is similar to those discussed by Stone, Wheatley and Wilkinson (2005) at the RBA, Yellen (2012) at the US Federal Reserve, and Haldane (2015) at the Bank of England. The main difference is that I have constrained the cash rate so that it cannot be cut below its lower bound (though this constraint is relaxed in Scenario 3).

(5) For example, Stanley Fischer has previously noted that ‘in practice almost all central banks give approximately equal weight to their inflation and employment or output goals’ (‘What have we learned from the crises of the last 20 years?’, speech at the International Monetary Conference, Toronto, 1 June 2015).

(8) This is similar to exercises that the RBA has run in the past. For example, Governor Lowe noted during his February 2020 testimony to the House of Representatives Standing Committee on Economics that ‘When we run it through our models, to get inflation up to 2½ per cent, say, in two years time, we would have to have interest rates—wait for it!—three or four percentage points lower than where we are now’.