Australia’s economic recovery has been swift, far exceeding the expectations of most economists. Leading indicators for the economy suggest that this rapid rate of improvement could continue in the coming months.

In this note, I use a modified version of the Reserve Bank of Australia’s (RBA’s) large-scale model of the Australian economy – MARTIN[1] – to assess what this recent strength could mean for the economic outlook and the RBA’s cash rate decisions through to 2030. I also run three scenarios to gauge how sensitive the outlook is to the timing of cash rate increases. Even with the firmer-than-expected nature of the recovery to date, the projections are consistent with RBA Governor Lowe’s guidance that the cash rate could remain unchanged through to 2024.

The recovery has been stronger-than-expected across many segments of the global and domestic economy. The bounce back of labour markets has been particularly striking, with successive downward revisions to the unemployment rate forecasts provided by central banks and the private sector. For example, in its August 2020 Statement on Monetary Policy, the RBA was forecasting Australia’s unemployment rate to be 10 per cent in the December quarter. Instead, it ended up being 6.8 per cent, more than three percentage points below expectations. Similarly, the unemployment rate fell to 5.6 per cent in March this year, which is almost one percentage point below the RBA’s current estimate for the June quarter (a forecast itself that has been revised considerably lower over time). 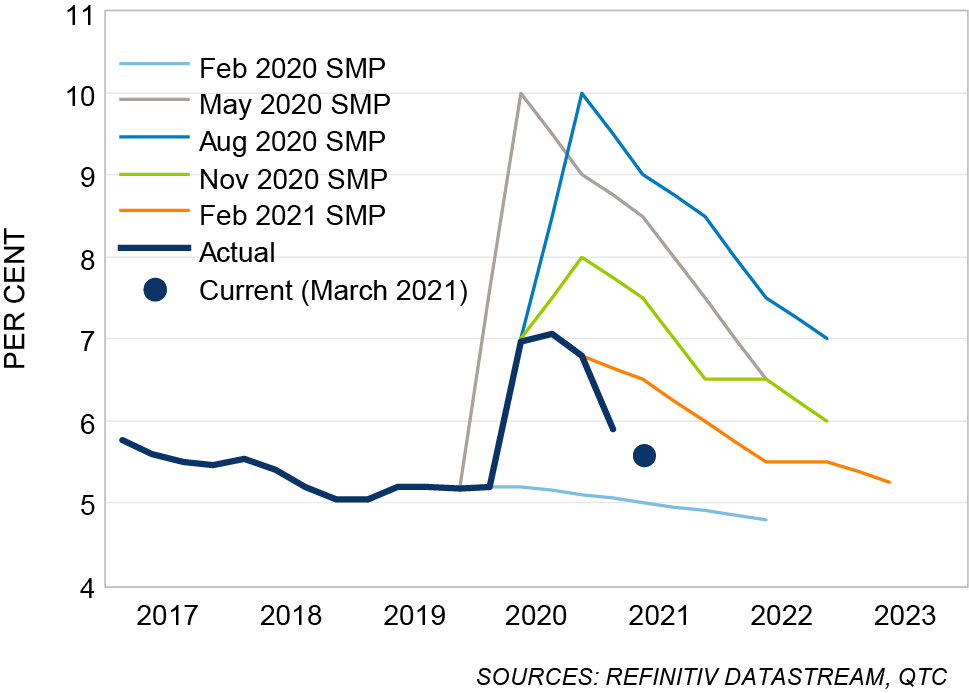 The RBA is likely to revise its forecasts further when its May Statement on Monetary Policy is released next Friday, 7 May 2021. This reflects the better-than-expected outcomes to date, as well as the prospects that this could continue in the coming months. This is evident in several of the indicators we have developed at QTC.[2] For example, those in Graph 2 provide readings on demand, employment, spare capacity and inflation[3] and have been fairly consistent with ‘official’ measures of these series throughout the recession and recovery. Furthermore, these are leading indicators and give a sense of how economic activity could evolve in the very near term. At present they suggest that the momentum observed recently could continue.

Graph 2: Leading Indicators for the Economy 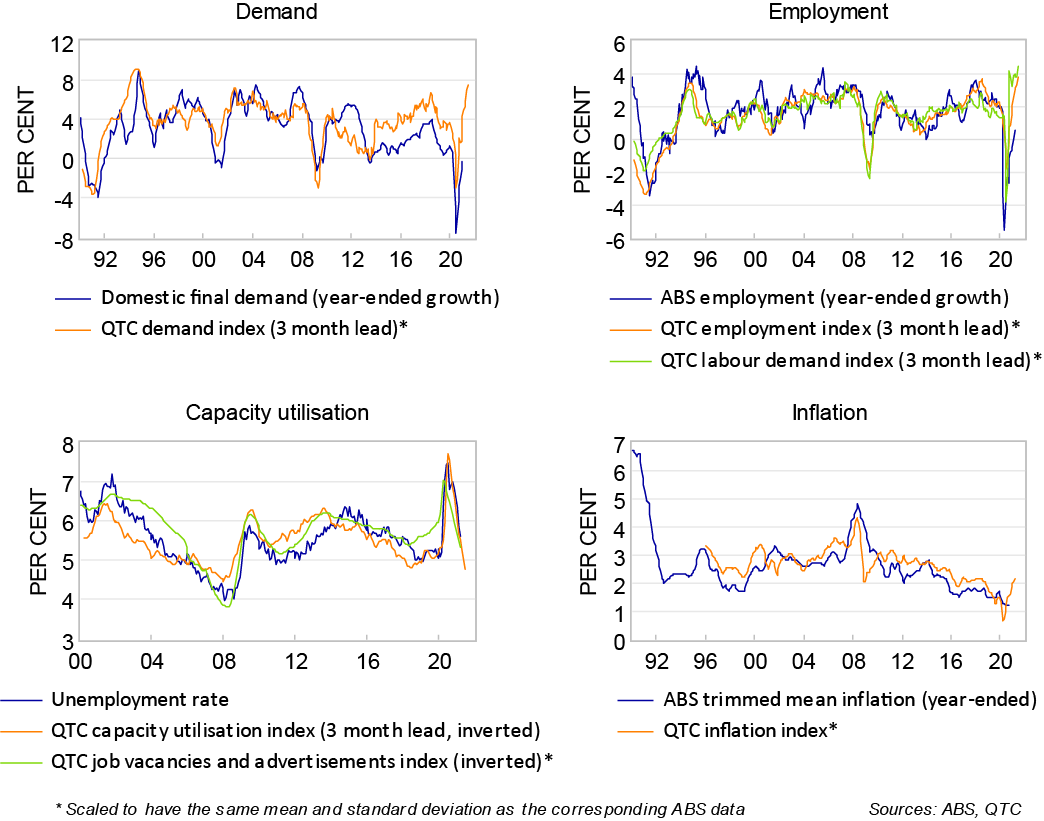 I have used a modified version of the RBA’s model – MARTIN – to assess the possible implications of this recent strength for the longer-term economic outlook. To do this, I first calibrated MARTIN’s estimates for the March and June quarter to ‘nowcasts’ that I put together based on a range of leading indicators. I then used MARTIN to construct three scenarios for the longer-term outlook, based on different assumptions for the timing of cash rate increases.

These assumptions have been used to assess the sensitivity of the outlook to the timing of cash rate increases. The RBA’s actual decision on when to increase the cash rate will be based on many different factors and cannot be replicated in a simple rule. Similarly, MARTIN’s projections may not correspond to those in the RBA’s May Statement on Monetary Policy, as this model is just one input into the RBA’s forecasting process. Still, this exercise provides a useful starting point to think about the upcoming Statement on Monetary Policy.

The projections are largely the same across the different scenarios through to the end of 2024. Economic conditions are expected to improve noticeably over this period, due to both continued low interest rates and the current momentum in the economy (Graph 3). 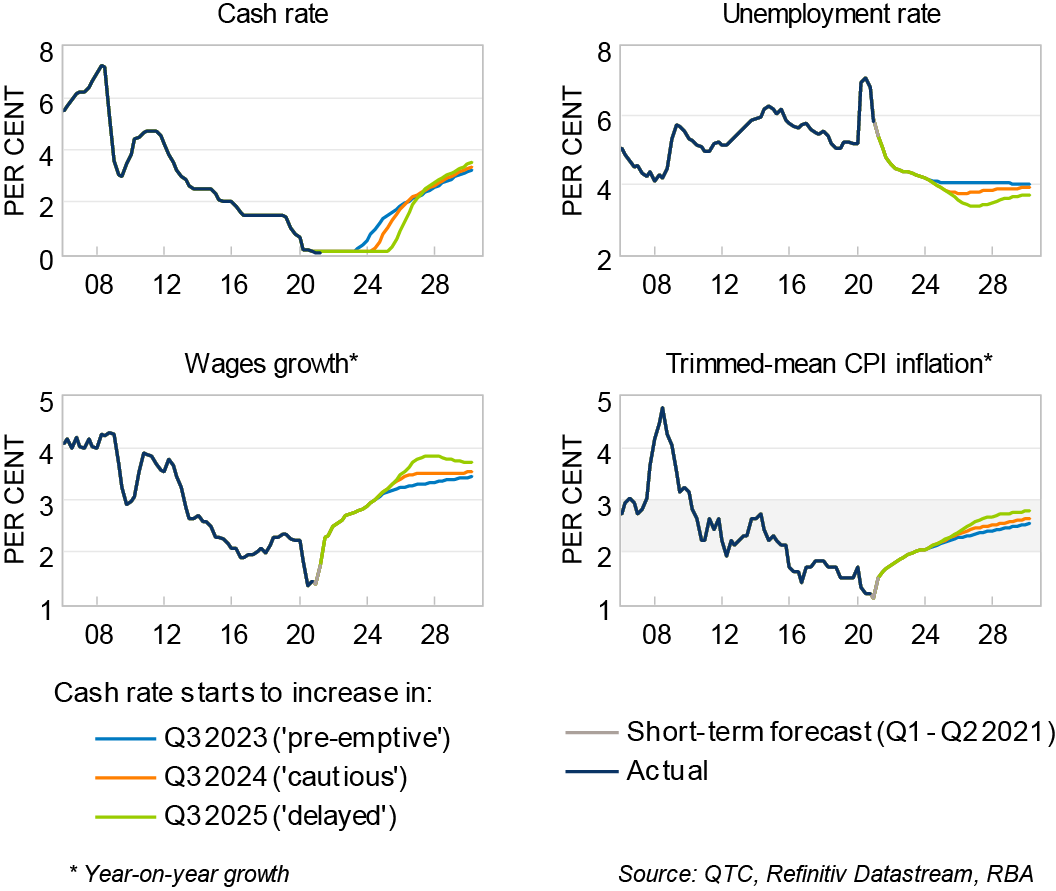 The projections start to diverge from around 2025 in response to the different cash rate paths.

RBA Governor Lowe has reinforced that he does not expect the Board to start increasing the cash rate until ‘2024 at the earliest’. Taken at face value, my results are supportive of these comments, with the RBA’s guidance appearing to be consistent with it achieving its inflation target over the medium term.

However, there are some caveats around these results:

Despite these caveats, models such as MARTIN provide a useful and consistent framework for assessing how the economic recovery could evolve over the coming years. They also allow us to easily test the sensitivity of the outlook to different assumptions, which is particularly important during periods of heightened uncertainty and rapid change.

[1] For a description of the RBA’s MARTIN model, see Ballantyne et al (2019). The modified version of MARTIN that I used for this project is largely based on publicly available code provided by David Stephan at The World Bank (available here). I have previously used this model to extend the RBA’s forecasts through to 2030, with the results available here: “2030 Vision: Outlook for the economy and interest rates”.

[3] This pick-up in expected inflation could simply reflect expectations for a temporary boost in the post-lockdown period, with most of the series in QTC’s composite measure of inflation expectations representing relatively short horizons.

[4] These comments were made during the speech ‘The Recovery, Investment and Monetary Policy’ (March 2021) and in the accompanying Q&A session.

[5] MARTIN assumes that real wage inflation is equal to labour productivity growth in the long run, to ensure that that the wage and capital shares of income are stable (Ballantyne et al, 2019).

[6] For comparison, the difference between the wage growth forecasts peaks at just over half a percentage point.