The views expressed in this post are entirely the author’s and may not reflect QTC’s position. The article has been posted for general information purposes and does not constitute financial or other advice.

In this piece, Trent assesses what higher crude oil prices could mean for inflation over the coming years and answers questions such as:

Crude oil prices have increased sharply in recent months, with the price of Brent crude oil peaking in March at its highest level since 2008 (Graph 1). While prices have eased slightly since this March peak, they remain around 35  per cent above the levels seen late last year. In this article, I assess what higher crude oil prices could mean for inflation over the coming years. 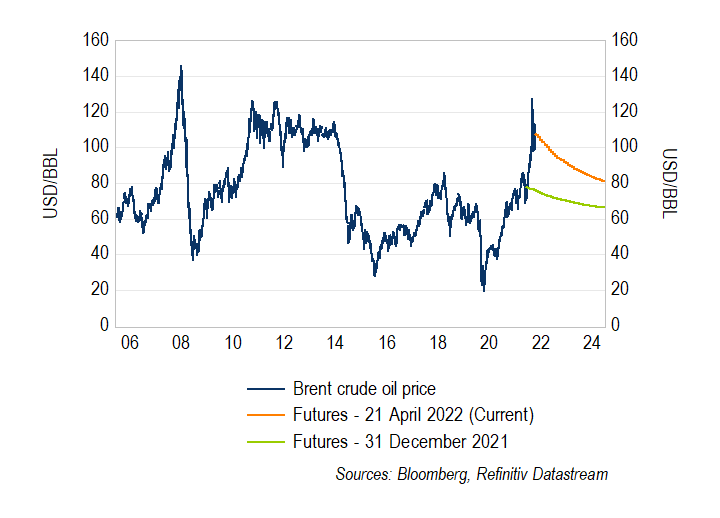 I estimate the effect on inflation will be as follows:

I discuss each of the channels of pass-through in more detail below. The Technical Appendix also provides further information on how these estimates were put together. 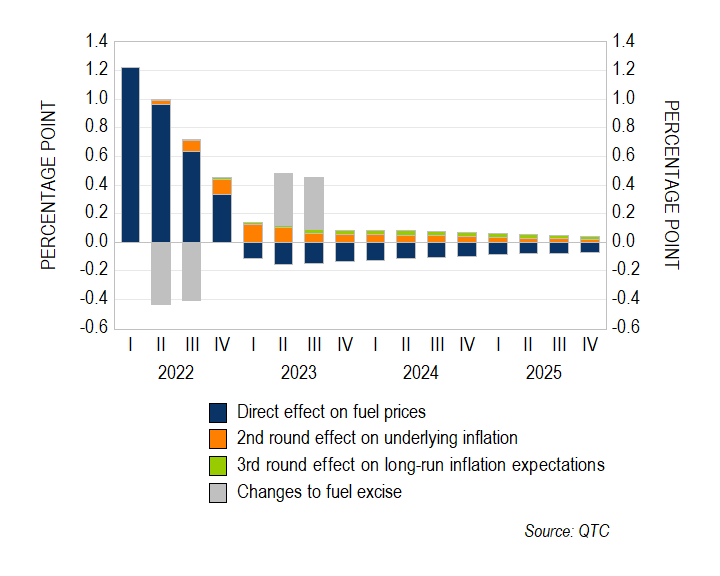 What is the direct effect of domestic fuel prices on inflation?

The clearest link between higher crude oil prices and domestic inflation is through its effect on retail fuel prices. The recent increases saw the national average petrol price peak at over $2 for a litre in March, up from around $1.6 per litre in December. These domestic fuel prices are directly measured in the CPI, with growth of the CPI measure of fuel prices typically being around half the size of that for Brent crude oil (Graph 3, panel 1).

Fuel prices are estimated to contribute around 0.4 percentage points to quarterly inflation and 1.2 percentage points to year-ended inflation in Q1 (Graph 3, panel 2). However, these contributions should be short-lived, with crude oil futures suggesting that prices will gradually ease over the coming years. The temporary reduction of the fuel excise will also weigh on inflation in Q2, though this effect will be offset by an increase in prices in Q4 when the reduction expires. 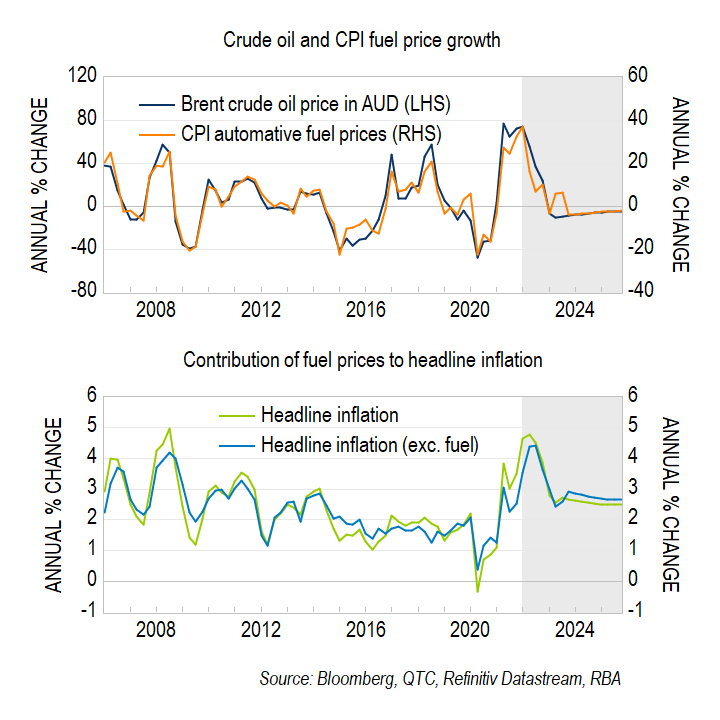 Will higher crude oil costs flow through to other prices in the economy?

The Reserve Bank of Australia (RBA) will be more focused on whether businesses are passing on higher costs to their customers, as these second‑round effects are likely to be more persistent. The possibility of this pass-through is supported by the Australian Bureau of Statistics March Business Conditions and Sentiments report, which suggests that of the nearly two-fifths of Australian businesses which expect to lift prices in the next three months, close to 90 per cent of these anticipate higher energy costs to be a factor behind any such move (Graph 4).

Graph 4: Factors impacting the price of goods and services over the next three months 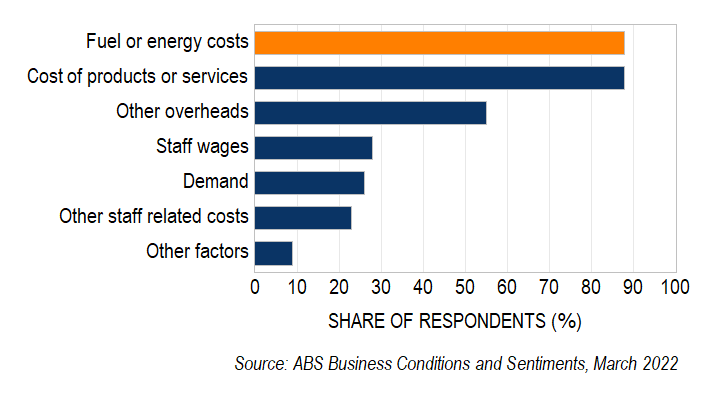 The RBA has previously suggested that oil accounts for between 2 and 3 per cent of the prices of non-fuel items in the CPI.[1] This implies that, if the recent oil-related cost increases were fully passed through to other prices in the economy, the level of non-fuel prices could be around 0.5 per cent higher. In practice, however, movements in oil prices are partly absorbed into margins and any pass-through tends to occur over a very long period.

To gauge the extent and timing of this second-round pass through, I have modified a few of the RBA’s trimmed-mean inflation models. The level of prices is estimated to be around 0.2 per cent higher by the end of 2025, though the effect on price growth is quite small as this increase occurs over a number of years (this is shown as the difference between the light blue and green line in Graph 5).

The models imply that businesses pass-on around 40 per cent of the cost of higher oil prices to non-fuel prices by 2025, with the rest absorbed into margins. The outlook for underlying inflation is slightly higher if I instead assume that these costs are passed on in full (the orange line in Graph 5). 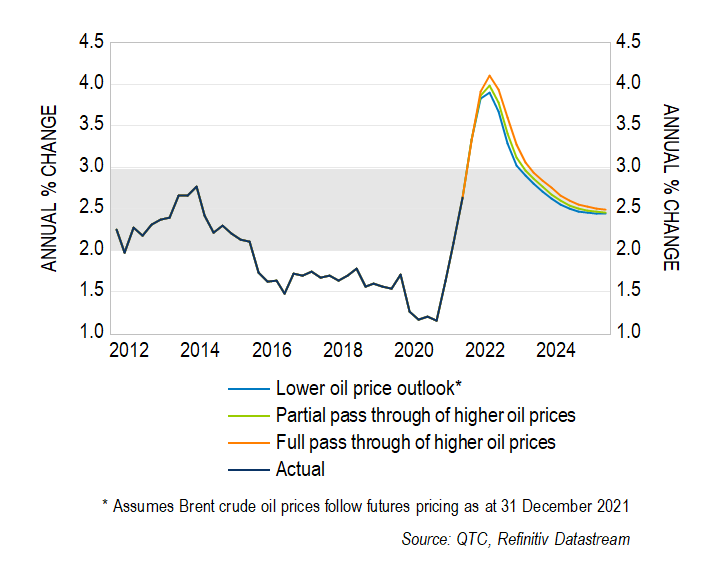 Will the changes in fuel prices shift household and business inflation expectations?

While this suggests the response of inflation expectations to crude oil prices has been relatively modest in the post-inflation targeting period, there is a risk the broader increase in inflation could see a more noticeable increase in some of these measures.

The estimates outlined in this article suggest the direct effect of higher crude oil prices on headline inflation in the March quarter will be relatively large, but also temporary. While there could be a longer-lasting pass through of higher oil-costs to other prices, the effect of this on trimmed-mean inflation is estimated to be quite small. The contribution of higher inflation expectations is estimated to be even smaller than the second-round pass through.

There is a lot of uncertainty around these estimates though. For example, while higher oil prices have tended to have only a transitory effect on inflation in recent decades, the current broad-based increase in prices could see businesses become more willing to pass on higher costs in the period ahead. Similarly, the current heightened focus on inflation could increase the sensitivity of consumer inflation expectations to a large and highly visible price increase, such as those for fuel prices. Despite these risks, my baseline expectation is that the indirect effects of higher oil prices on inflation will be relatively small.

The information within this article is intended for general information purposes only and does not constitute financial or other advice. Specific professional advice should be obtained before acting on the basis of any matter covered in this article. This information has been prepared in part by data sourced from third parties which has not been independently verified. Queensland Treasury Corporation (QTC) issues no invitation to anyone to rely on the information and expressly excludes any warranties or representations as to its currency, accuracy, completeness, availability or suitability. All opinions expressed are the views of the author and may differ from the views of QTC or other QTC servants or agents. Forecasts are not a guarantee or reliable indicator of future performance. To the extent permitted by law, neither QTC nor any of its servants or agents accept any liability whatsoever in connection with the use of, or reliance on, the information contained in this article regardless of cause. Copyright in this document is reserved by QTC. No part of it may be reproduced, copied or published in any form or by any means without QTC’s prior written consent.